Today at school we counted bags because we are recycling them. Our total number is 8660. It's part of Bag Up Manitoba! -Dylan W
Wow! 8660 bags for Bag Up Manitoba! That's a lot of bags. -Carter 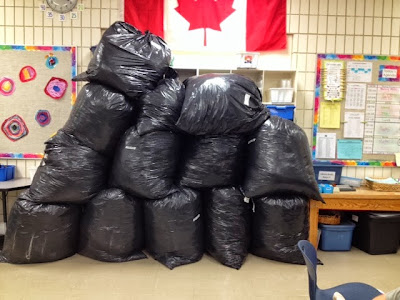 Today we counted 1150 bags. That is lots for 20 kids. On Tuesday we are having a Bag Up Manitoba assembly. Some people were on the announcements so they won't get to talk but they'll do some acting for the steps of how we do it. The people that did not talk on the announcements will talk. We might get a park bench if we are in the top 15 schools. If we're not in the top 15 schools, we'll get birdhouses. -Cali
We have a tower of bags in our classroom. -Anna
Today we found a diaper in a bag. We found a Lego cape. -Jackson
We also found in a bag, a pink envelope. -Jonathan
We found lots of reciepts in lots of bags. -Carter

We are collecting bags until November 1, so if you still have some at home, send them in! -Ms. Clarke
Posted by Erin Clarke at 3:59 PM