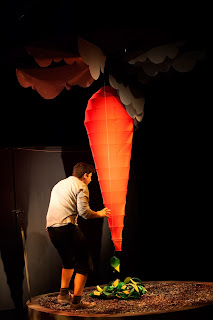 Today we went to MTYP and we saw the show Jack and the Bean. At the end, we got a magic bean. -Nick
At the first part of the play, Jack was selling toys and I got a teddy bear. Then he said how much do you have for it, and I said "Nothing" so I gave it back. -Karys
It was really funny because the worm told us to dig, eat, poo, and grow. -Sofia
We sat in the front row on the stage and we got to dance with the worm. Jack climbed up to the clouds and the giant had black gold. -Matt D
There was disco lights when we were dancing. -Danika
At the end of the play, we each got a lima bean that he used to put in the ground. The beanstalk worked because a lady had a control and when Jack put the bean in the ground, and there was a hole in the ground, and there was a rope. The rope had leaves and the vine. She used the remote to control it. -Cali
It took a long time to get there and to get back. The play took a long time. A person in the play did four parts: the worm, the gardener, the giant, and the dad. -Cole
We listened to a song. Jack said we had to get down everytime we heard a sound. -Anna
Jack was funny. -Dylan W

It was a great trip to MTYP and a great first week back for me. Thank you to all of our families for the kind words and messages that you've sent. I am very fortunate to work in such a kind and caring community. Have a great weekend. -Ms. Clarke
Posted by Erin Clarke at 3:22 PM