Today Kaiya brought her turtle and her Dad found it alone from it's group. It was cute. -Brandon
We got to see a turtle today. I think it was kind of fun seeing it. -Sam
I was fun but we didn't get to touch it because it was too scared. She told us it was a painted turtle. -Reegan
Today Kaiya's turtle came in a Ziplock plastic box. There was a turtle and it had dirty water and there were some peas floating in the water. It was awesome! -Cam
Today we got to see Kaiya's turtle and we didn't get to touch it. It eats shrimp and vegetable. Wallace got to see it too. -Carter 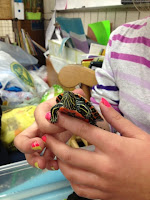 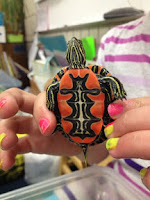 The spinach is poisonous to the turtle so it can't have spinach. It was found in the wild and now it's Kaiya's pet. That was my second time seeing a turtle. I saw a different turtle at my lake but it wasn't a very good one because it was a snapping turtle. -Rhianna
Her turtle was a painted turtle and on its tummy it was like almost a painting because it was like orange and black and yellow swirled together. At Grand Cayman I saw lots of turtles. -Syd
Today we saw a turtle and his name was Ernie. -Elle
Kaiya brought her awesome turtle to school. It is very cute. -Rylee
He was floating and he was swimming and he was trying to get out. That turtle looked pretty cool. Today was an awesome day. -Nick
It tried to escape! -Cayden
The turtle is awesome! -Jonathan
Last year under my chair was a big snapping turtle. It almost snapped me when I got off. -Ella
Posted by Erin Clarke at 4:09 PM