Today is Halfway Day! Halfway Day is where we've already been in school for half of the year, and 94 more days are left in school. We celebrated Halfway Day by doing 4 different projects. The first project was making the other half of our faces with pencils and pencil crayons. The second one was having one bowl of pretzels and two cups of apple juice to share. The third was painting half of one thing and sticking it to the other side of the paper. The fourth one was reading with a partner. One person read half a page, and the other person read half a page. -Rhianna

Today we did an art project about Halfway Day. Mrs. Malkoske cut our pictures in half and we had to draw the other half. Then we had a snack and we had to share with someone. It was preztels and half a cup of apple juice. You had to split the pretzels by counting them. -Karys

The painting project wasn't just about painting, it was learning about symmetry. Something is symmetrical when its the exact same on the other side. For example, let's say a kite. It has to be the exact same on both sides. If the kite has a little short wing and the other one is a big wing, the kite wouldn't fly right. -Rylee

We made a project that one side you can paint. Mine was a rocketship. I painted and then I folded it into like a hotdog. When I open it up, there were two sides. -Sam

In the afternoon, we did a project. We could make anything we wanted to make. We could make a rocketship, a butterfly. We had to color it in and fold it and open it up. Then it will look really nice. -Nick 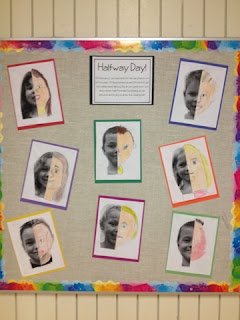 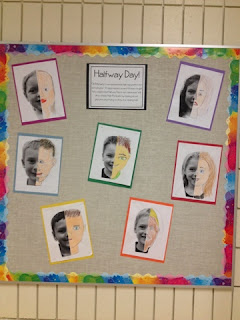 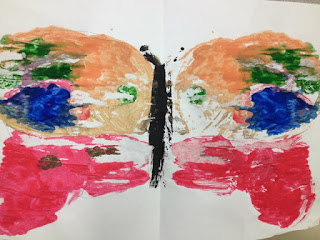 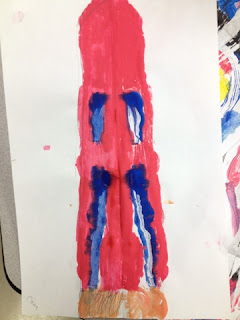 Thank you for your posts!

I heard all about your Halfway Day today, on the drive home. Alexander explained in great detail all that went on in your classroom ... he really enjoyed creating these AWESOME art projects!

Thank you Mrs. Malkoske for posting their beautiful work! Their portraits are AWESOME!

I just have to say that you have the most creative project ideas! Our children are very fortunate to benefit from all of your efforts! THANK YOU!

And welcome back ... we are happy to have you back in the classroom. It sounds like you had an AWESOME conference in Florida; I'm sure you have lots to share with the class. Thanks for keeping us posted!

What an AWESOME adventure!

This is so cool. The pictures are really neat. you guys did a really good job and I liked the idea of halfway day.

I remember doing something similar when i was in grade 1 or 2, it was so much fun! what was your favourite part?