On Thursday we released our butterflies and we had to put our fingers in sugar water. We went by the garden to release them. -Reegan
On the weekend Mrs. Malkoske took the butterflies home and she couldn't keep them because it was May Long Weekend and butterflies need to be outside and eat their food. -Rylee
When we were trying to put the butterflies on our fingers, a lot of them went out of the net so we all didn't get a turn to hold them. -Cali
Before we released the butterflies, me and Sydney stayed in and we got more food and sugar water for another set of butterflies. Mrs. Malkoske had to move one set of butterflies to the other cage. One got out and it landed on me. Outside, when we had to let them go, a lot of them flew away. Two were on Alexander because they liked him. There were still some chysalids left. -Rhianna
That day when we let the butterflies go, when me and Rhianna stayed in, the butterfly that got out it first landed on Rhianna's leg and then it flew to the window. So I picked it up and I put it back in the cage. I thought it was cool to hold a butterfly because I'd never done it before. -Syd 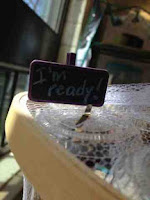 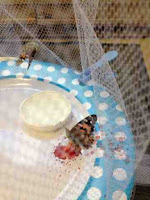 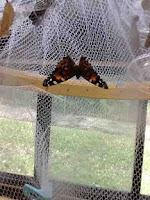 The first picture says "I'm ready!" because the butterfly was ready to come out. You could see the wings through the chysalis. The second picture shows left over parts from the caterpillar (the red stuff). It comes out when the butterfly comes out of the chrysalis (it's called meconium). 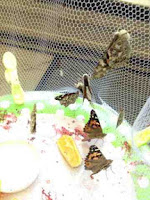 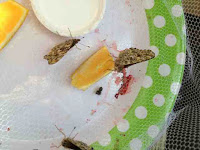 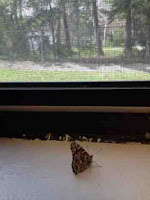 This is a butterfly eating an orange. The butterfly eats it from it's proboscis. The second picture shows the butterfly looking out the window because we had an escaper. 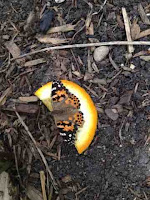 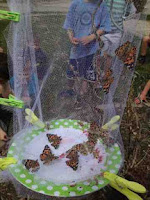 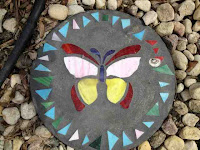 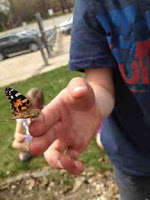 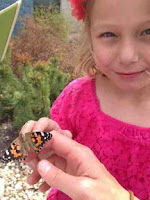 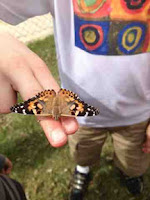 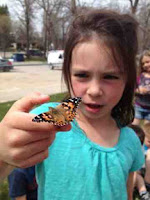 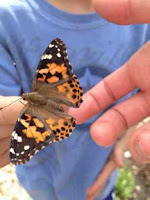 These are some pictures of us saying goodbye to our butterflies. 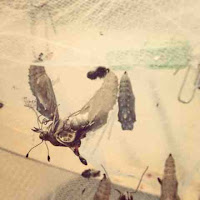 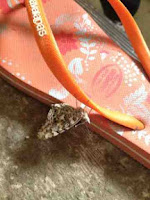