Today in the morning we went on our buses to the Manitoba Museum. First we saw a community map and we had to put some magnets on it. -Nick
Everybody got to put some on. There were tipis, a school, houses, stores, Assiniboine River, and Red River. - Elly
We learned somethings about houses and schools and hospitals. It was pretty fun. -Sam
We went to the city. There was a whole bunch of different things like a sewing shop, the office for the sewing shop, drug store, a hotel, and the church. -Kaspir
We went to the theatre, the restaurant, train tracks, a park, and the chinese laundry. -Andy 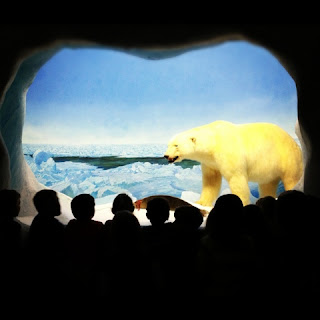 Then we went on the boat, the Nonsuch. You had to climb down backwards and no touching the ropes. I liked the downstairs. -Karys
Mrs. Scalesi told us the Nonsuch was supposed to be haunted. -Jonathan
There was lots of ropes on the Nonsuch. -Sofia
After we toured around upstairs of the museum we went downstairs to the science gallery. There were three little fish tanks. One had two turtles in it. It was awesome. -Sydney
While we were by the ship, my group went upstairs into the cottages and we saw little beds for the people who wash the dock. -Ella
When we were in the olden days we went into this little thing. We saw this man driling a hole in the kid's tooth. That was his little office and he lived there. -Cali
In the science gallery there was a ball and you pressed a button and there was air coming out and it pushed in the air. There was also a racing section. You got to build a car if you wanted. There were four that were already made and two kids I saw they made their own. They were really cool. -Rhianna
At the Science Gallery there were little booties and you had to wear them to go into the Matrix. It was really cool. It looks like you'll just go right through, but it's actually small like the bathroom. -Rylee

WOW! You all did so much on this field trip. It is amazing how much detail you all can share with us when you each take a turn telling us about it. It is like reading a story!
Thank you for sharing all of your memories with us!

It sounds like you guys had a great time at the museum! Wow, that polar bear looks real!!
Eryn (Elly's mom)