Today we did drumming with Mr. Jay and we learned what the drum is called. It's called a djembe. -Kayla
On Monday we started drumming with Mr. Jay. We had an assembly and we met Mr. Jay there. He told us we were going to have the grade 3ers and down to have classes this week. Next week the grade 4s and 5s and 6s are going to do their drumming classes. On the two Fridays we're all going to present what we learned in Mr. Jay's class. -Reegan
At the assembly, Mr. Jay showed us some of his pictures. One of his pictures was a crocodile and it was eating a chicken. He did some drumming for us and it was really cool. Mr. Jay was an Artist in the School. There was another picture and it was these girls making medicine. The medicine looked yucky to me because they used yucky stuff like branches, leaves, and rocks and snakeskin. -Elly
During the assembly Mr. Jay told us that he lived in Africa for about 4 years. The country he lived in was Ghana. In the assembly he also showed us a drum. We didn't know it was called a djembe yet. He played really fast because he is really good at it. When we had our first class he taught us two differnt notes. One note was the bass and the other note was an open one. Right now we are making a big difference because on Monday we were playing slower and right now we're playing faster. He is teaching us about some more instruments in Africa. -Rhianna
At drumming we learn lots from Mr. Jay and how to play lots of songs from the drum. Mr. Jay gives us three things to remember. "I like chocolate eggs. They are really yummy." AND "What's to eat? Mmm Mmmm Pepperoni Pizza Yum Yum." -Sofia
Our assembly is at 2:40 in the afternoon on Friday, April 5, 2013. 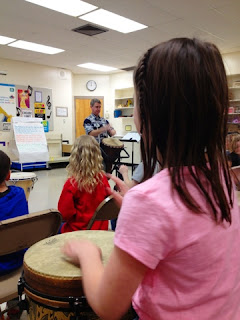 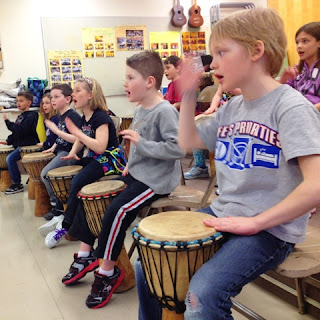 Thank you for sharing all that you learned with Mr. Jay. Can't wait to see your performance today!
Mrs. Oddy

Hello drummers, just wanted to tell you all that you sounded awesome at the assembly on Friday. It was sure fun to watch. Great job everyone!