The Cat Came Back!

Today we went on a bus to MTYP to watch "The Cat Came Back". It was a play. -Nick
On the bus I sat on seat 8 at the back. I was sitting with Ashley and Olivia and Taylor was beside us. -Jolene
Before the play started Cameron lost his mitt under the seat and at the end of the show Sam couldn't find his mitt. -Jadyn
There was a cat in the play. The play had Mr. Johnson and Fred Penner and 3 other people. The play was really funny. -Rhianna
I sat beside Aliegha and the cat was scratching his head and he got really angry and shooed it off. Then he was chasing the cat and the cat ran away from him and Fred Penner played his guitar and sang songs. -Madeline
Mr. Johnson was trying to find kitty and he tried to smack him with his book. -Lindsay
Fred Penner tried to teach Mr. Johnson a lesson that he should treat his family the way he wants to be treated. At the end when he learned his manners, the cat had two kittens. -Ashley
There was a song that went "home is a place where you learn to love." -Kendall
The cat was always behind Mr. Johnson and he trying to find it but he couldn't. -Sydney H
The cat was tearing Mr. Johnson's sweater off. It was so funny. The cat was scratching and biting. -Cameron 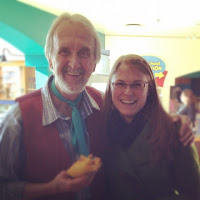 At the end of the play the cat got little babies and they were really cute. -Rylee
The cat had kittens. The cat was hiding from Mr. Johnson. -Sydney R
At the end the cat was not coming when they sang the cat song. Then they saw his tail and then he was
playing hide and seek. -Sam﻿
After the play was over, a guy had the cat and he put it on my head. -Aliegha
We had lots of fun and at the end me and Tristan laughed a lot. It was so fun. -Tyson
The cat kissed me on the way out. -Ms. Anderlic
This field trip was awesome! I grew up watching Fred Penner's Place on CBC (like many other Canadian kids in the 80's). It was on every morning, around 11 o'clock and I would watch while my mom made lunch. I remember watching him crawl through the hollow log at the beginning and end of the show, and listening to him sing and talk with Word Bird. Needless to say, was very excited to find out that Fred was actually in this show. As we were leaving the theatre, the actors were in the lobby with the cat puppets talking to kids as they left. I couldn't resist the opportunity for a quick photo with Fred. :) What a great way to end the week!
-Mrs. Malkoske
Posted by Erin Clarke at 3:44 PM

What a fun play for the children to enjoy! What's not to love about Fred Penner??? Thanks for taking them on such a super fun field trip!!! Mrs. Barnes