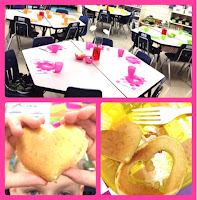 On the table, when we got the pancakes, there were pancake cutters that we used to make our pancakes heart shaped. -Jolene
We put syrup on our pancakes and it was a yummy pancake. I had four pancakes. -Cameron
Mrs. Malkoske read a book about Splat the Cat. It was about Valentine's Day. After we made Splat the Cat or Kitten. -Kaspir
During the book Splat, when he was walking to school, he would always see Kitten and Kitten would poke his belly, tie his tail and call him smelly. After that we made black Splats or grey Kittens. -Sydney H
We made Splat the Cat or Kitten. Mrs. Malkoske dropped a blob of paint on our paper and you had to spread it around to make a cat or kitten. -Peyton
We used our fingers to spread out the paint for the arms, legs, ears and tail. You could make your tail curly, squiggly or zigzag. I made mine a zigzag. The hardest part was when you had to cut out his eyes, nose, mouth and tongue. You couldn't really get the shape of the eyes. -Tristan
We had a party and Mrs. Malkoske picked 5 kids to hand out their Valentine's, then she picked a table to get their food and then another table, and then another table. After 5 kids were done handing out Valentines they got their treats and then Mrs. Malkoske picked 5 other kids to give out thier Valentines. I gave out Fun Dips with stickers on them. -Taylor
Today we were handing out Valentines. I was handing out suckers. -Nick
Today was Valentine's Day! We gave cards to each other. -Sam
At the end of the day we had a party and people were giving out their Valentine's Day cards. It was too much to put in the bag so they had to put some out and into their bags and not in the folder. They were over flowing with cards. -Ashley
Today we had a Skype call with Mrs. Malkoske's sister. They sang Valentine's songs to us. -Cole
(Note: My sister sings with a quartet called "The Pinetones" in Bemiji, Minnesota. Every Valentine's Day they deliver "singing Valentine's" all around Bemiji. All of the money they collect for their services is donated to the Bemiji Food Shelf. This year they did their very first Skype singing Valentine for our class <3 )
Posted by Erin Clarke at 8:10 PM

They are soooooo cute. Thank them from the parents! Rm 9 is lucky.

I have watched this three times! What a great class.