After last recess we met an author and her name was Debbie Holme. She read us her book called "Sarah's Poppy Puppy". It was fun -Tristan 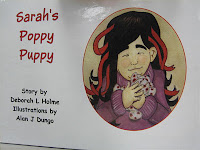 We met her after last recess. The book was about Remembrance Day because it's almost Remembrance Day. -Taylor
The book was about her uncle and the war and poppies. He died in the war. -Jadyn
It was about her family. I asked "Do you like being an author?" and she said she does. In the book they found a box with family things that are special. -Sydney R
In the story they found a box with a toy and 4 medals. -Peyton
The book was really cool. It had a poppy puppy in there. -Tyson 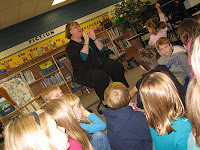 The book was about the war. -Sam
They found an old newspaper in the box. -Kendall
They travelled to go to the cemetary to plant flowers by the grave. -Cole
She (the author) was wearing one of the medals from the story. -Jolene
We wrote questions for the author and we asked her. The story was very fun. -Cameron
It was kind of sad because her uncle died in the war. -Rhianna
We had fun because we learned about being an author. I had fun learning about authors and the war. -Rylee
Posted by Erin Clarke at 4:14 PM

I think that the story was awesome. I think it was sad that her Uncle died in the war. This is the first author I ever met! We read a story at home tonight that is also about Remembrance Day - it is called "A Poppy is to Remember." - Kendall

Thank you for having me in your classroom today. I enjoyed working and spending time with all of you. I had an awesome morning!