Memoirs of a Goldfish 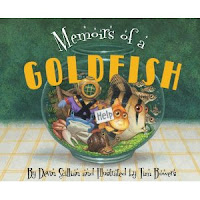 Today we read the book "Memoirs of a Goldfish" by Devin Scillian. Before we read the book we talked about the word memoirs. Some of us made a guess about what it might mean. Kaspir said, "It's kind of like memories". Sydney H said, "it means memories of something that you had." Those were both great guesses. Madeline thought the book was hilarious and so did Mrs. Malkoske. Tristan liked when the snail fainted and he wrote a story like this story but he tried to take on the perspective of a turtle and a crab. Cameron liked when everything went in the bowl. Jadyn liked when the goldfish got mad. Jolene liked when the goldfish saw another goldfish but thought it was his reflection. Kendall liked when it swam around it's bowl once. Then twice. Jonathon liked the cover. The goldfish was stuck in the middle with a sign that said help. Lindsay liked the snail.
We talked about getting a few more pets for our classroom. We are thinking we might need some frogs, another fish, and maybe a hermit crab (although Mrs. Malkoske has been quiet unlucky with hermit crabs).
Posted by Erin Clarke at 3:08 PM

I realy like the books on your Shelfari. The onle book I read is How I Became a Pirate. What is your favourite book on the Shelfari?

I like this book. Who read this book to you? My favourite book is On The Run books #1, 2, and 3. Gordon Korman wrote them.