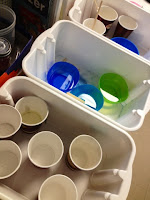 Today we had centres. One was water table, the rest were stirring. The water table was dirty. -Nick
We were doing our thing and we put in sand and we mixed in the sand. The sand was floating and when we were mixing it, it was sinking. -Sam
I had fun during centres. -Rylee
When we had centres we were talking about solids and liquids and gases. -Aaron
During centres Mrs. Klausen came and helped us. -Olivia
My first centre was syrup, paint, and water. There were questions on our paper. Our centre was number 5. We had to pour sugar in it the second time. The first time we just had to talk about what it looked like. -Tristan
At our first centre, it was at our table, it was number 5. We had to do something with sugar, water, paint, and syrup. We had to put the sugar in the paint and the water and the syrup and then after we mixed them up. At the end of the centre we went to the next one. It was the water table. We had to write down the objects that we used and we had to write what the things did, if they floated or sunk. -Ashley
We had a fantastic time with Mrs. Klausen at science centres time. -Cameron
My centre was number 4. We had to put the sand, sugar and salt in the water and see what happens. -Lindsay
Our centre was number 3 and we had to put food colouring in paint, oil and water and mix it and see what happened. -Peyton
When we did centres, my first centre was the water table. We had to see if something floated or sunk. One of the the things was both. A cup sunk if it had water in it. If it didn't have water in it, it floated. The slinky sunk. -Madeline
My centre was the fifth centre. I liked pouring the sugar into the paint, syrup and water. -Sydney R
For those of you who have been waiting to see our SNOWBALL characters... Here they are! 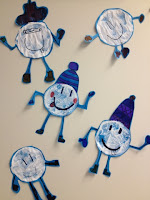 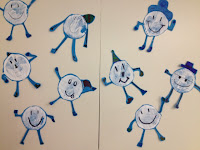 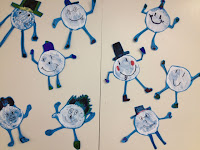 rylee. i love you